So, something pretty incredible happened a few weeks ago. God nudged me and I shared a piece of my story with my amazing followers on Instagram. Basically the jist of it was that I know how it feels to not have a lot. To be barely making it. To be broken, hopeless and to be in a place of complete desolation. I shared that I remember crying out to God in my empty apartment with absolutely NOTHING in it, no bed. no table… literally an empty space with nothing. I shared that  in my case how much it would have meant to me for someone to think of ME in a selfless way and sprinkle a little kindness on me. I had shared that I felt called to bless someone with a few hundred dollars to do as they please. Make their home more of a cozy haven, get a haircut or massage or something that would make them feel thought of and special. Or for basic needs, whatever it was I wanted to sprinkle some kindness towards someone else. I asked for my followers to nominate someone who God has laid on their heart who would be blessed by a small gift that I had to offer.

Well, God took that little act of faith of me stepping out when he called and you guys – HE multiplied it! HE took my “fish and bread” and blew my mind. We started out with $200 and all of a sudden my inbox was BLOWN UP with people wanting to help. Sending straighteners, candles, home décor etc and pay paling me money to add to that $200. By the time all was said and done we ended up with $550 a Meijer gift card, a hat and mittens, wooden sign, candle with cute matches and a straightener. It was so beautiful to watch everything unfold.

I had been praying over all the messages that were sent about WHO needed this blessing. I was truly planning on shipping the items to whoever God wanted to be chosen. Then, I received this huge email and as I started reading this incredible story I had goosebumps and I just knew this was it. This is who God has set aside to be blessed with what we had all rallied together to give her. The best part for me was she was close enough to actually meet, which I wasn’t ever expecting.

Lets be completely honest, I wasn’t expecting any of this. The extra money being sent, the gifts to give this sweet woman. I had NO expectations when I shared a small piece of my story but God knew all along what he was doing and who it was for. This small act of faith has blessed me more than I could have ever imagined. To be honest I was SCARED TO DEATH to share. Not because I have shame but because I was basically shouting to the world some private secrets I keep between my close friends and my immediate family. But GOD does NOT pull us out of desolation to sit back and pretend that our pretty life is how it’s always been. That is dishonoring anything he has done for us and the work we have done with him to save ourselves. To be silenced is not bringing glory to his name. To be quiet and just going about life, like it’s always been pretty and wrapped in a bow will NEVER bring people to Jesus. There is something so powerful when the broken become transformed and redeemed and then begin to tell people about Jesus and show through their life what He has done for them. People who are hurting relate better to someone who has been hurting too.  If God has saved you – Shout it from the mountaintops when he tells you too. Share when you feel called. He nudges us for a reason – Listen to it. He never leaves or abandons us. When we leap, he is ready to give us wings and soar. Just TRUST. 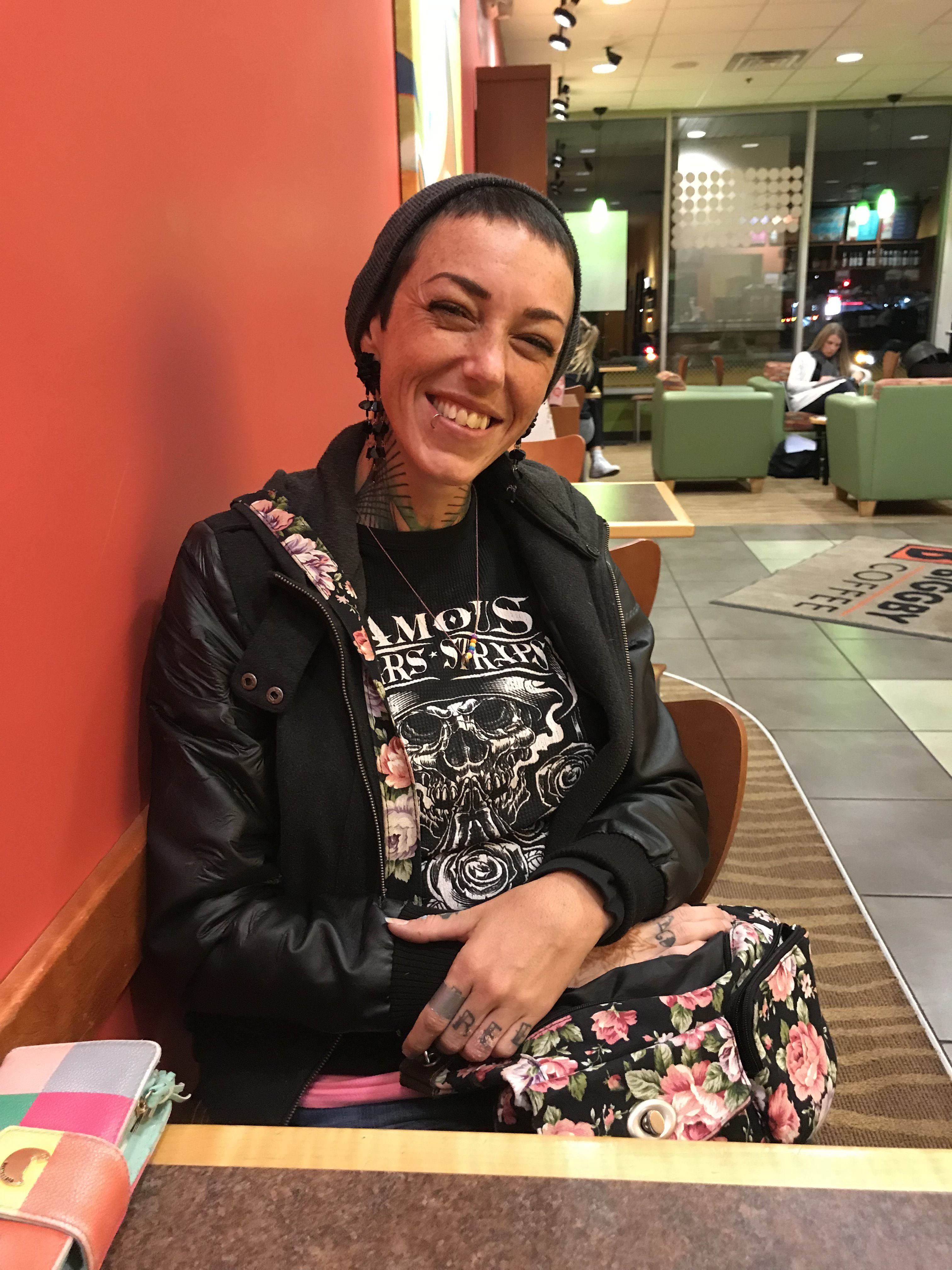 Ok, now to Leyna. Our amazing giveaway winner. Her story screams Beauty from Ashes. She has overcome so much. She grew up with a very twisted image of God and was abused in unspeakable ways by those who were supposed to love and protect her and also by the men who preached about God in her community. She grew up isolated and believed everything around her was normal. Everything changed for her when her parents divorced. Her life was turned upside down and she was shunned by the only world she had ever known. She became the mother figure to care for her younger siblings and she was given alcohol and cigarettes in return. She continued to be the object to take anger out on by the ones who were called to protect her.

At 17 she was kicked out and with nowhere to go and no money to survive she ended up at a friends who suggested dancing. After years of sexual abuse and the fact no one was allowed to touch her it seemed like a safe place. And she would make money in return for doing the things she had been forced to do. She had shelter, money and food and was able to finish high school at the same time. The other women around her introduced her to drugs and from there it was a downward spiral. She ended up being trafficked. And continued to climb the ladder in the adult industry.

Years of self-destruction came to a halt for Leyna on a trip to compete for an adult industry title. The driver of the van she was in fell asleep at the wheel and she didn’t have a seat belt on. She heard a man say “You will be ok, but this is going to hurt” and felt a very strong hand on her cheek hold her back against the seat while the van flipped seven times. She knew the man who spoke and saved her was God. She had multiple injuries and couldn’t do anything for herself for quite a while. She was angry at God and let him know it. He was meeting her right where she was and was ready to pick her up and carry her to redemption if she allowed. He was ready to unteach all the confusion that had been sown into her heart and mind as a child. He was ready to show her who He really was. Not what the men from her childhood said but that He was after her heart, her mind, her soul. That He loved her. That He cared for her. She was set apart and chosen. That He wanted HER as she was. He offered GRACE, FORGIVENESS & REDEMPTION. He wanted to bless her, re-establish her and He wanted to rip away all the demonic activity that had been tormenting her for so long. He was ready, if she was. Leyna put in the work with God and began rebuilding her life.

Fast-forward many years she is married with five girls and lives in Grand Rapids. She has allowed God to take her ashes and He has given her beauty. She is using her story to bless those around her and to give them hope. She now runs several ministries in the Grand Rapids area and she is an artist. She is passionate about helping the homeless, sex trafficking victims and those affected by mental illness. She literally gives everything away. If someone needs something and she has it, its theirs. She takes nothing for herself but is constantly being poured out over the broken lives in the Grand Rapids area. She never complains and never asks for anything in return but goes about her days spreading the Love of Jesus to those around her. She gave God her story and prayed that He would use her and whatever she has to further his kingdom here on earth and he is doing just that. Using her past to bring glory to HIS name. She chose to lay down all her broken pieces and surrender them at the foot of the cross and asked God to use her as a vessel, which He is.

Her story is beautiful! She is so Brave, so kind and is full of compassion. She intends to continue to do what she is doing now. Lighting the world on fire with the love of Jesus and spreading hope to those who feel hopeless. 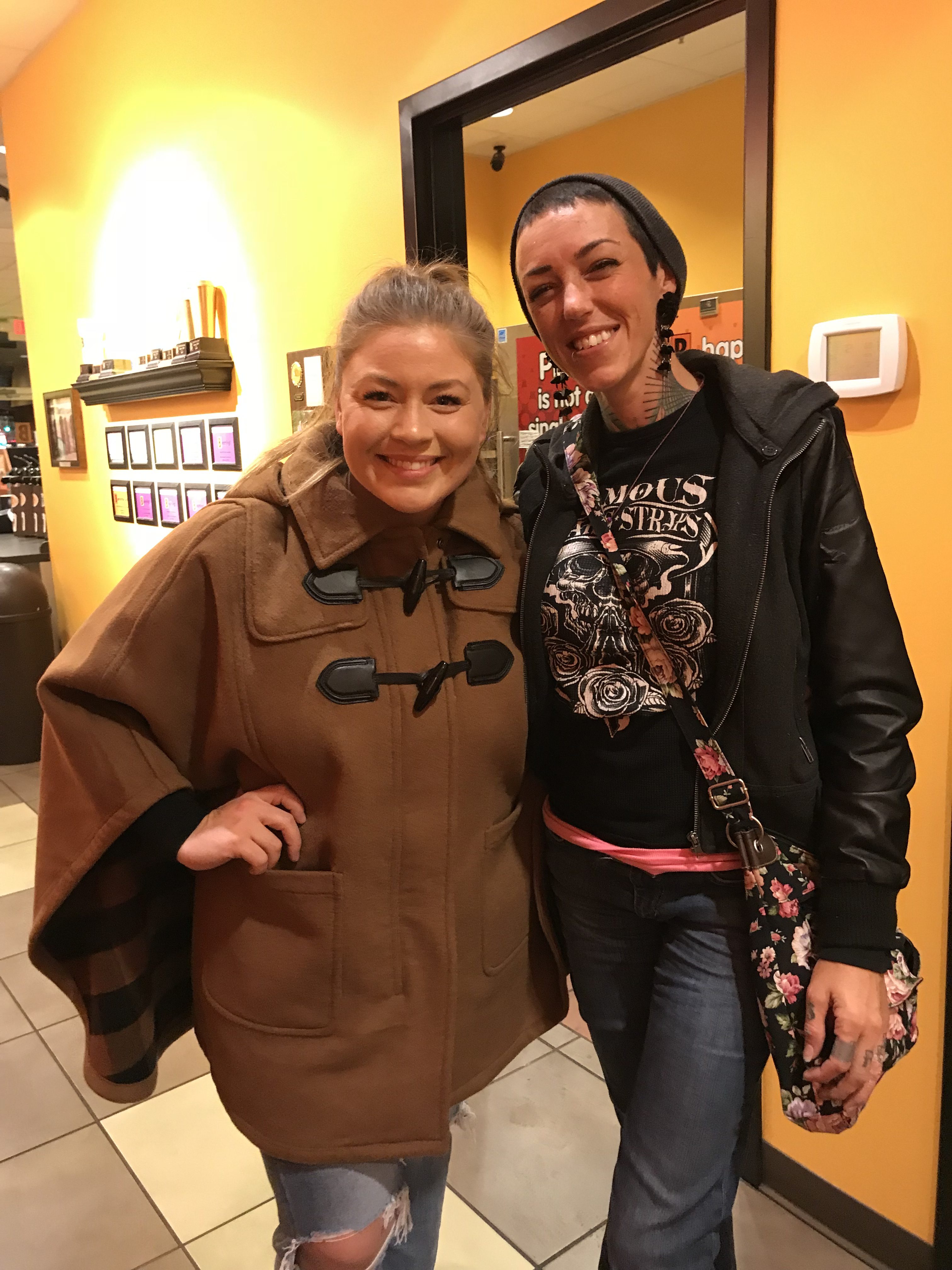 Leyna and I met at Biggby. After a big hug I told her a little bit about my story and how I shared it on social media and how God multiplied the little I had to offer with all my amazing followers who wanted to help too and that God wanted her to receive this blessing. It was beautiful. She cried, I cried and when she opened the wooden sign she said that is exactly what she had been asking God for.  A sign that what she is doing is worthwhile and meaningful. She was overwhelmed and filled with Joy at what God had done through his children for her. I chatted with her for 2.5 hours! It was like we were old friends and sharing stories, talking about life, family, the church and the change that needs to be made in the world today. It was beautiful. God is amazing. He is STILL working and moving through his children and using us as his hands and feet. No one is perfect. I am not and neither are you but what we CAN be is laid down lovers of Jesus who shine bright for him in a dark and mean world. Love, kindness and grace – Spread them everywhere.

Thank you again for all who contributed to this giveaway. Truly from the bottom of my heart thank you for teaming up with me to bless Leyna. She is an amazing woman who needed those things to not only brighten her world but to remember that God is still answering prayers through his children.I’m so thankful that I had the chance to meet with her and that I could be a small part of a blessing that God had intended just for her.

I pray that this encourages you to take the leap of faith when you feel God nudge you. His plans, as seen here, are so much bigger than what we could even possibly think about. His plan was far bigger than mine when I stepped out, knees shaking in faith and trusted what he said I needed to do. The best thing was to see it come full circle and what he had known all along needed to happen.

Hurt and pain don’t discriminate and neither does Jesus. It wears jimmy choo’s and caries a louis Vuitton bag. It’s white, black and brown and everything in-between. It wears target jeans and takes the bus. Its waddling pregnant at Aldis. It drives a minivan. Its sitting at the bar getting drunk. It’s a millionaire. Its strung out on drugs. It’s a CEO. It’s a prostitute. It’s your mailman. It’s your friend. It’s your sister. It drives a Cadillac. Jesus doesn’t discriminate, pain doesn’t descrimate and neither should YOU. Always choose kindness.

We started building the cabinet in the Mudroom to

Home is just an empty space filled with things if

Transform your textured walls for $20 ❤️ I req

My favorite part of designing this bathroom was dr